Civil Disobedience in a time of Climate Crisis

Last week, I decided to get arrested for the first time in my life. As a person who has believed in the power and rule of law as a force for good throughout my 25-year career as a lawyer, this was no small decision.

I firmly believe in the role and importance of civil disobedience as a critical strategy in social change movements – I grew up in the United States where the actions of people like Martin Luther King and Rosa Parks are celebrated, and even romanticised. But, as a human rights lawyer, I have always felt that getting arrested and breaking the law was not my role.

I reasoned that I was more useful to the human rights movement as a lawmaker, not a law breaker – as an “upstanding member of society” with a clean rap sheet. In my work at EarthRights, for example, when you go up against corporations like Chevron, Shell, or Chiquita, they’ll use anything against you – and I never wanted to give them the ammo that, “oh, these are just a bunch of rabble rousing lawyers who will do anything to prove their point: ‘look, she was just in jail last week – she doesn’t respect the law so why would you respect her and her position in this case?’”

But after 25 years of using the legal system, obeying all of the rules, and indeed, often winning, I have come to realise that the power of law, alone, is not enough. 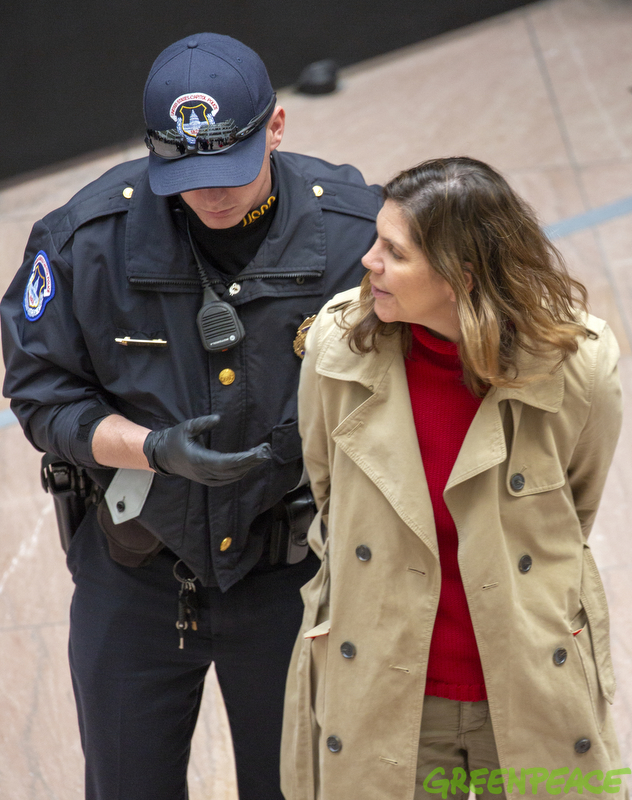 As the recent unprecedented statement signed by over 11,000 scientists has screamed out: the science around the climate crisis is clear, we don’t have the luxury of the time it takes for the legal system to resolve a crisis of this magnitude, nor is it designed to do so. Due process is lengthy and time consuming – we’ve sadly pushed the planet to its scientific limits and are in a situation where the earth can’t wait.

Of course, my organisation, EarthRights, does use the legal system to seek justice, and we are using litigation to go straight to the source of the problem. EarthRights is suing fossil fuel corporations in the US, seeking justice on behalf of communities who are already suffering, and paying for the damage caused by climate change. 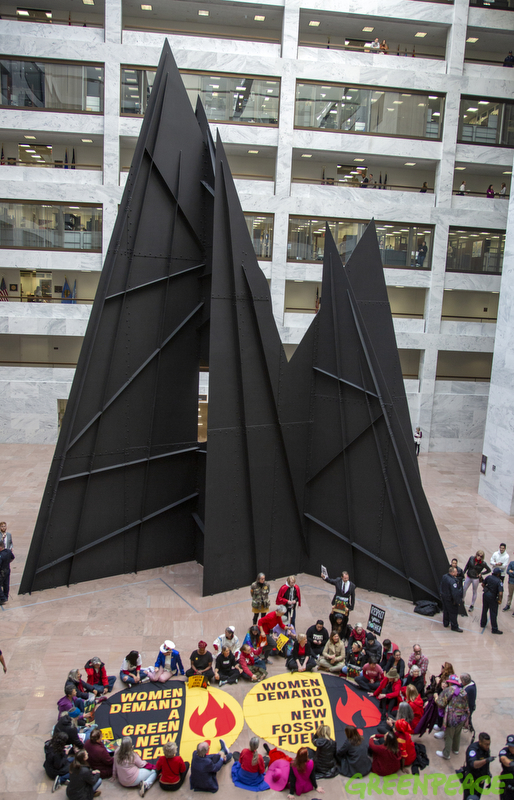 Activist with banners protest in the Atrium of the Senate Hart Office Building before their arrest during the fourth Fire Drill Friday. Photo supplied: Greenpeace

I’m proud of our lawyers and our legal strategies, and the fact that our case is the first to be cleared to proceed in state court, which is where we want to be and where the companies like Exxon and Suncor do not.

But we’ve spent the past two years fighting JUST about that – whether to be in state or federal court – and we simply don’t have the time to wait for the courts to decide who should pay for climate change.

At EarthRights, we believe in movement lawyering – that litigation is part of our broader strategy to unleash the power of affected communities, inspire action on policy, and help build the political power that is necessary to actually achieve the transformational change that we need. Until now, I didn’t think that me getting arrested would help – but at this point, I feel like we need to try anything, so that’s what I decided to do.

I have always believed in that famous quote, attributed to Martin Luther King (although I don’t think he actually said it), that all social justice activists comfort themselves with at various points in their career: “The arc of history is long, but it swings towards justice,” Unfortunately, the science has made clear that we don’t have the time for it to swing in this particular situation.

We need to throw down, and rise up, in new ways.

Perhaps it’s another law that transformational change – of the kind we need here – only ever happens when people put their bodies on the line.

Let me be honest at the outset: In the US, as a white citizen, protesting in Washington DC – with the protection of the extra attention that celebrities like Jane Fonda, Catherine Keener, Katherine LaNasa and Rosanna Arquette bring – I knew I wasn’t taking any kind of risk that could ever be compared to the kinds that people have taken in the past, such as in Tiananmen Square or Burma or, more recently, in Hong Kong, Sudan or Iraq.

I knew that the Washington DC capital police were ready for dozens of women, that they have their “arrest the protesters” drill down to a science, and that they would be extra careful given the celebrities involved  So, I wasn’t putting my body on the line, really.

But I did decide that it’s time to put my body where my mouth is.

And so I joined the Fire Drill Fridays movement. This was week four of Jane Fonda’s four-month call to action to support the youth climate strikers’ demands for immediate action. The week-four theme was Fire Drill Fridays: Women Can’t Wait! which focused on the disproportionate impact of the climate crisis on women and celebrated women’s leadership in fighting back.

I will admit that I am usually sceptical about celebrity causes and protest speeches, but I feel that this one is different.

Jane Fonda moved to DC and organised four months straight of weekly rallies and civil disobedience actions, using her networks and celebrity to draw attention to, and build political power around, this crisis with the specific demand of ending fossil fuel expansion and keeping existing reserves in the ground.

Not only is this the only message that I can get behind at this time (and the only one the science supports), but the method in which she is using her celebrity is inspiring and effective. This is not a stunt – it’s a strategic, highly organised mobilisation of power. Every week is focused on a different aspect of the climate crisis, and she gathers experts and celebrities alike in two days of activities around that particular issue.

On Thursday evening, before each rally, she hosts an hour-long online teach-in where the experts – and celebrities passionate about that particular issue – educate tens of thousands who tune in to learn and answer questions during the Facebook live event. Then, on Friday, those same celebrities, experts, and others join Jane near the capital for a public rally, which includes more speeches, more public education, singing and art…. and then the protest action for those who want to partake.

Those who decide to risk arrest with Jane march together to the chosen site and, in a peaceful and orchestrated way, break the law. And the fact that Jane was getting arrested for the fourth straight week – and therefore destined to spend time in jail – made me think that this was something different.

In DC, if you have no recent arrests, you can usually pay $50 and get released that same day. The second time, same thing. The third time, you have to show up for a court date. But if you have a pending court date and you get arrested again, then you have to go to jail. Since this was Jane’s fourth arrest in four weeks, she knew she was going to jail.

She’s the real deal! If you listen to her National Public Radio interview that day, when they asked her if she was afraid to go to jail, she said, “I’m 82 years old. And, no, it’s very hard to scare me – intimacy maybe, but not jail.” (In fact, Fonda turns 82 in December 2019.)

Also, when we were in jail together, she was spending the time trying to strategise her next actions. I’m speaking at her event on 3 January 2020, which is the penultimate Fire Drill Friday – it’s about who should be held accountable for climate change, who should pay. She was asking me and others where we should protest, where we should get arrested … I’m telling you, if I’m even half that active and badass at 81, I’ll be proud.

When I decided to put my body where my mouth is, some friends and activists were critical of my decision. My husband, Ka Hsaw Wa, for example, thought I was nuts and kind of silly. He protested that “people like me from countries like Burma spend our lives trying to stay out of jail, we hate jail, it’s a terrible place of suffering and abuse, why would you ever try to go…”

It’s not that he doesn’t get civil disobedience, he just doesn’t necessarily think it’s helpful given his experience. For many activists a prison – even if only for a few hours – evokes trauma. Ka Hsaw Wa was tortured and spent time in real jail, not like my four hours in what was more like jail camp with some amazing women …

Linked to this, family members in Burma and also colleagues from countries around the world were worried, even scared, when they saw photos on Facebook of the police carting me off. Outside of the US – where arrest and jail are the real deal – people were frightened and concerned. Reminding me that my experience would have been totally different if I were black, brown, or not a citizen.

And, as revealed in recent reports, protest is increasingly deadly for many environmental activists.

But as a result of protests, fossil fuel industries are facing more scrutiny than ever, and are finally being held to account – or soon will be. They know their days are numbered, they are in their death throes, and like any dying beast, they have become more vicious and desperate as they retaliate against those who threaten them.

In the US, whether it’s weaponising the legal system against activists, as in Standing Rock (see the Protect the Protest website); or the EarthRights lawsuit where we defended Krystal Two Bulls and other activist organisations against the crazy Racketeer Influenced and Corrupt Organisations Act (RCO) claims against them); or whether it’s the spate of new “critical infrastructure” bills being introduced to heighten penalties against protesters of fossil fuel projects, this industry is going after our First Amendment Rights in unprecedented ways.

Protest matters, and protest works.  It’s because of this that the right to protest is under attack. We need to defend it fiercely – and that includes me actually taking risks, however small, to exercise and demand that right, as long as I still can.