STOP the Militarization of Space

Saying NO to the militarization of space

We continue our weekly segment dealing with the ongoing militarization of space.

As the US continues to withdraw from international arms treaties, will the weaponization and militarization of space bring the world closer to catastrophe? Karl Grossman, space expert and professor of journalism at the State University of New York, College at Old Westbury, joins Brian and John.

Interview with Karl Grossman this week about the secret U.S. Air Force “space plane,” the X-37b, just landing after 780 days in space, and NATO expected to next month declare space a “war-fighting domain,” and the Trump push for a Space Force — all despite, as I emphasize, the Outer Space Treaty of 1967 setting space aside for “peaceful purposes.”

But the USA, China and Russia seem to be engaged in a race to have or gain the upper hand in space too. This must stop.

Listen to "Saying NO to the militarization of space" on Spreaker.

LINK UP with the

GLOBAL NETWORK AGAINST NUCLEAR POWER AND WEAPONS IN SPACE 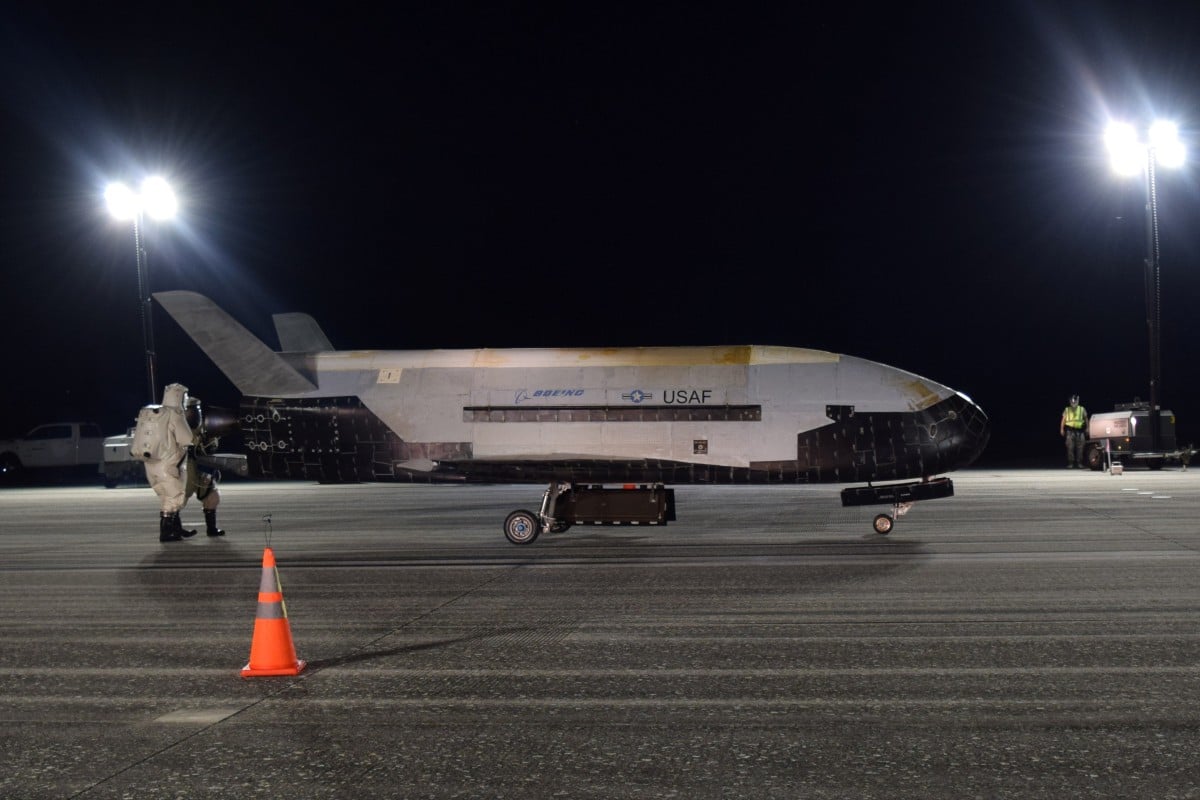 The US Air Force's X-37B after landing at Nasa’s Kennedy Space Centre in Florida on Sunday. Photo: Handout

The world’s only reusable space vehicle, the Boeing X-37B, returned to Nasa’s Kennedy Space Centre in Cape Canaveral, Florida, on Sunday after 780 days in orbit. According to the US Air Force, its mission objectives were completed successfully, including “providing a ride for small satellites”.

It was the unmanned space plane’s fifth and longest mission, raising the programme’s total number of days spent in orbit to 2,865. The air force is preparing to launch the sixth X-37B mission next year.

Compared to the space shuttle, the orbital test vehicle is smaller but flies for much longer, and appears to be dedicated mainly to military tasks.

Heather Wilson, former secretary of the US Air Force, said the X-37B’s strength was that it circles the Earth in “an orbit that looks like an egg”, and can manoeuvre when it moves close to the Earth’s atmosphere to change its orbit.

“Which means our adversaries don’t know – and that happens on the far side of the Earth from our adversaries – where it’s going to come up next,” Wilson said at the Aspen Security Forum in July. “And we know that drives them nuts. And I’m really glad about that.”

Trump & Pence: "WE MUST HAVE AMERICAN DOMINANCE IN SPACE!" 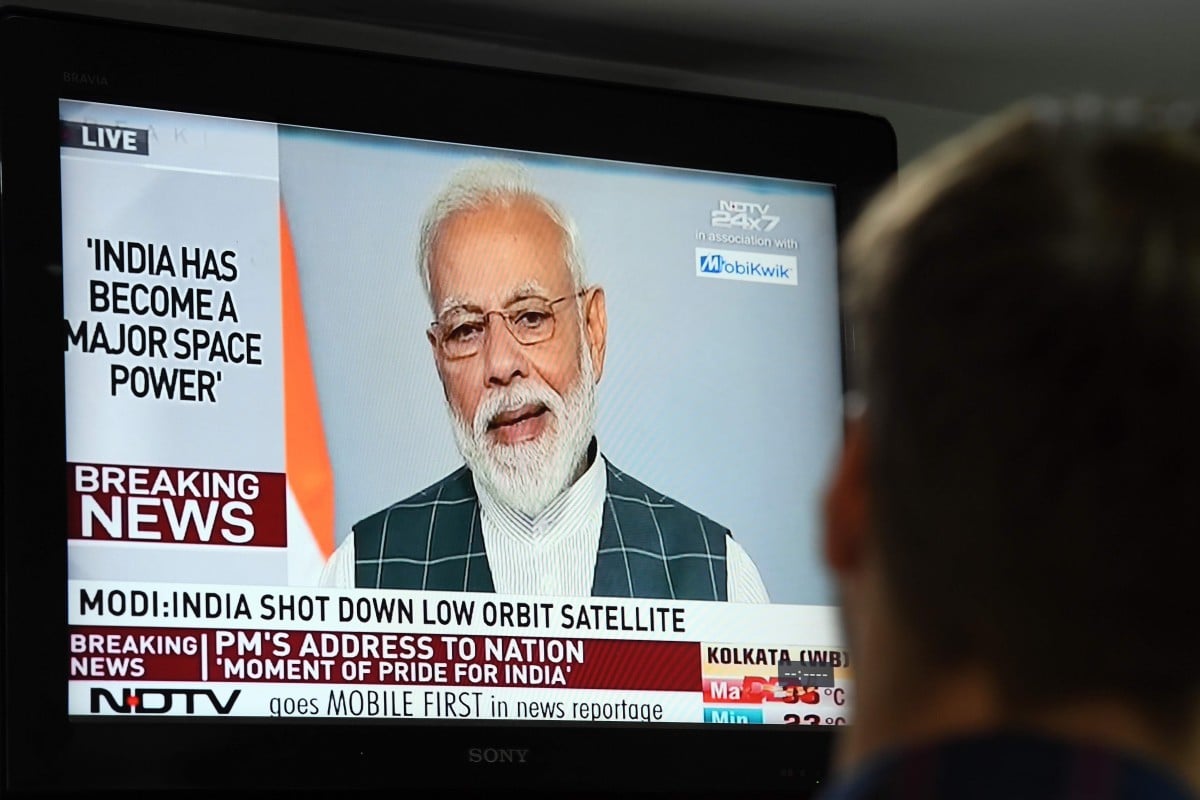 A man watches Indian Prime Minister Narendra Modi's address to the nation where he announced India had destroyed a low-orbiting satellite in a missile test. Photo: AFP

Satellites are integral to communications and national security, so it is little wonder nations with the capability want to put in place systems to prevent their damage or destruction. India has joined China, Russia and the United States with that capacity, last month shooting down one of its own satellites with a ground-to-space missile to prove its ability. Prime Minister Narendra Modi, campaigning for re-election, hailed the event and contended his country was now a space power. His nationalistic pride was misplaced; weaponising places beyond Earth is one matter, but creating hazardous debris without regard for others is quite another.

India blowing up satellite with missile was ‘terrible’, Nasa says

The timing of the test and Modi’s announcement on live television is understandably being viewed by opponents as an attempt to score votes ahead of the month-long general election, which begins on Thursday. An investigation has been opened by the Election Commission into whether the electoral code of conduct has been violated. Lost in the triumphant flag-waving is the reality that authorities gave no warning of the plan and foreign governments were caught off guard. The surprise highlights the lack of an international mechanism to regulate activities in space and enforce rules.

India’s destruction of the satellite created hundreds of pieces of debris that pose a risk to the space assets of other nations. Objects in Earth’s orbit move at great speeds that can cause damage or destruction should they collide with spacecraft and they have been blamed on occasion for satellite failures. Modi said his country’s test had been carried out in low orbit to minimise dangers and that the debris would fall to Earth and burn up on re-entry. But that position has been challenged by experts, including officials from the US space agency, who contend the six crew on board the International Space Station could be at risk should debris move to higher orbits.

A similar test by China in 2007 was widely criticised. There are United Nations guidelines on tracking and recovering debris, but no rules on weapons testing. India should have learned a lesson; there should be peaceful cooperation in space and greater effort to mitigate creation of space junk.

HEAVILY-ARMOURED vehicles loaded with laser cannons will be deployed by the US Army within the next three years.

The upcoming weapon systems each chew through enough energy to power several homes and can take down drones, helicopters and incoming missiles.

Officially known as "directed energy lasers", they'll hit battlefields in the year 2022 attached to a platoon of four vehicles, an army report stated.

"The time is now to get directed energy weapons to the battlefield," Lt. Gen. L. Neil Thurgood, Director of Hypersonics, Directed Energy, Space and Rapid Acquisition, said in the report.

"The Army recognises the need for directed energy lasers as part of the Army's modernisation plan.

"This is no longer a research effort or a demonstration effort. It is a strategic combat capability, and we are on the right path to get it in Soldiers' hands."

Army researchers have worked on the weapon for several years.

High energy lasers travel at the speed of light and are one way the Army plans to defend itself from new aerial threats, according to an Army release.

The extreme temperatures they produce is able to simply melt enemy craft in an instant.

Aerial threats of concern to US troops include drones loaded with guns or explosives.

The nimble craft have been used in several attacks in recent years and are notoriously difficult to shoot out of the sky with conventional weaponry.

The new laser cannons will be loaded onto US Army "Stryker" vehicles – eight-wheeled, all-terrain beasts that can hit speeds of 60 mph.

The cannons looks like a large, black bulb jutting from the rear of the vehicles, and are used to defend against air threats.

It produces a whopping 50 kilowatts of power – about the same amount needed to power three homes.

As well as drones and missiles, the laser could be used to take down some fixed-wing aircraft, according to the Army.

Several laser beams could be directed at a target at once to burn holes through larger foes.

It's not yet clear where they will be deployed, nor how many the US Army plans to produce in future.

The Royal Navy is working on a £30million scheme to build powerful lasers to protect our ships from missiles.

Terrifying space weapons of the future

Here are three of the scariest...

In other news, the Royal Navy is testing a new weapon that uses a powerful laser to slice through enemies.

Russia recently showed off its "ground force" of killer robots in an unsettling video.