The Pentagon is the “single largest producer of greenhouse gases in the world,” according to a new study about climate change that accuses the Trump administration of being in “various modes of denial” about it.

The report, from Brown University’s ‘Costs of War’ project, focuses specifically on "post-9/11 wars" and their impact on emissions. It estimates the US military has been responsible for 1,212 million metric tons of greenhouse gases between 2001 and 2017. Emissions from “overseas contingency operations” in Afghanistan, Pakistan, Iraq and Syria accounted for more than 400 million metric tons of CO2. In 2017 alone, the report says, “the Pentagon's emissions were greater than all emissions from Sweden or Denmark.”

The effects of climate change will soon be “feeding political tensions and fueling mass migrations and refugee crises,” the report says, noting that the military has already added climate change to its list of national security concerns.

The researchers criticized the Pentagon for acknowledging the threat of climate change to national security, but failing to acknowledge "that its own fuel use is a major contributor.” They also accused "some elements" within the Trump administration of being "in various modes of climate denial.”

While the military received praise for making some effort to decrease its energy consumption, including by gradually replacing some non-tactical fleet vehicles with hybrid, plug-in or alternative fuel vehicles, reducing idling, and developing solar installations at some bases, the report says there is “room for more reductions.”

The study found seven major sources of greenhouse gas emissions relating to US military activities, including from installations and non-war operations, war-related emissions and emissions from the production of weapons. Emissions caused by the reconstruction of destroyed infrastructure in war zones and the deliberate burning of oil wells and refineries by all parties to war have also been factored in.

The authors also question whether the huge US presence in the Persian Gulf is necessary, since the US itself is less dependent on the region's oil than in the past and does not necessarily need to “protect the global flow” of oil.

One of the recommendations was that the Pentagon should report its fuel consumption to Congress annually, information which is currently “explicitly withheld.”

The researchers also recommended that each military installation should draw up plans to reduce energy consumption by 10 percent by 2022, and advised increased use of alternative fuels, hybrid vehicles and renewable energy. The Pentagon should also identify which military and national guard bases could be closed, whether due to climate change impacts or diminished threats.

The US military must urgently "reduce their role" in creating greenhouse gas emissions as a matter of national security, the report urged, concluding that if it takes bold actions to reduce fossil fuel use, there could be “enormous positive implications” for the climate. 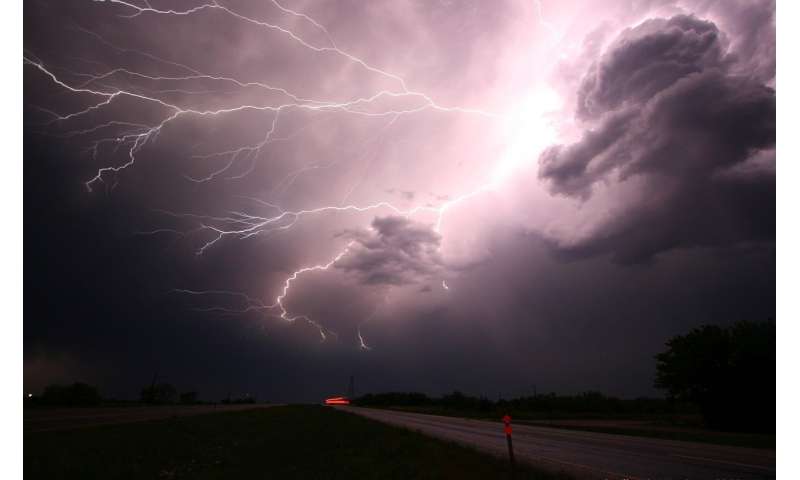 The US military's carbon footprint is enormous and must be confronted in order to have a substantial effect on battling global warming.

Research by social scientists from Durham University and Lancaster University shows the US military is one of the largest climate polluters in history, consuming more liquid fuels and emitting more CO2e (carbon-dioxide equivalent) than most countries.

The majority of greenhouse gas (GHG) accounting routinely focuses on civilian energy use and fuel consumption, not on the US military. This new study, published in Transactions of the Institute of British Geographers, calculates part of the US military's impact on climate change through critical analysis of its global logistical supply chains.

The research provides an independent public assessment of the US military's greenhouse gas emissions. It reports that if the US military were a nation state, it would be the 47th largest emitter of GHG in the world, if only taking into account the emission from fuel usage.

Report co-author Dr. Patrick Bigger, of Lancaster University Environment Centre, said: "The US Military has long understood it is not immune from the potential consequences of climate change—recognising it as a threat multiplier that can exacerbate other threats—nor has it ignored its own contribution to the problem.

"Yet its climate policy is fundamentally contradictory—confronting the effects of climate change while remaining the largest single institutional consumer of hydrocarbons in the world, a situation it is locked into for years to come because of its dependence on existing aircraft and warships for open-ended operations around the globe."

Despite the recent increase in attention, the US military's dependence on fossil fuels is unlikely to change. The US is continuing to pursue open-ended operations around the globe, with the life-cycles of existing military aircraft and warships locking them into hydrocarbons for years to come.

The research comes at a time when the US military is preparing for climate change through both its global supply networks and its security infrastructure. This study brings transparency to one of the world's largest institutional consumers of hydrocarbons at a time when the issue is a hot-button topic on the US Presidential campaign trail. Leading Democratic candidates, such as Senator Elizabeth Warren, are asking critical questions of the role of the US military in climate change and examining its plans for the future.

Co-author Dr. Benjamin Neimark, Associate Director of the Pentland Centre for Sustainability in Business at Lancaster, said: "This research provides ample evidence to support recent calls by activist networks to include the US military in Congresswoman Alexandria Ocasio-Cortez's Green New Deal and other international climate treaties."

Co-author Dr. Oliver Belcher, of Durham University's Department of Geography, said: "Our research demonstrates that to account for the US military as a major climate actor, you must understand the logistical supply chain that makes its acquisition and consumption of hydrocarbon-based fuels possible.

"How do we account for the most far-reaching, sophisticated supply chains, and the largest climate polluter in history? While incremental changes can amount to radical effects in the long-run, there is no shortage of evidence that the climate is at a tipping point and more is needed."

The researchers' examination of the US military 'carbon boot-print' started with the US Defense Logistics Agency—Energy (DLA-E), a powerful yet virtually unresearched sub-agency within the larger Defense Logistics Agency. It is the primary purchase-point for hydrocarbon-based fuels for the US Military, and a powerful actor in the global oil market, with the fuels it delivers powering everything from routine base operations in the USA to forward operating bases in Afghanistan.

"An important way to cool off the furnace of the climate emergency is to turn off vast sections of the military machine," added Dr. Neimark. "This will have not only the immediate effect of reducing emissions in the here-and-now, but create a disincentive in developing new hydrocarbon infrastructure integral to US military operations."

Other key findings of the report include:

More information: Oliver Belcher et al, Hidden carbon costs of the "everywhere war": Logistics, geopolitical ecology, and the carbon boot-print of the US military, Transactions of the Institute of British Geographers (2019). DOI: 10.1111/tran.12319

by Benjamin Neimark, Oliver Belcher And Patrick Bigger, The Conversation 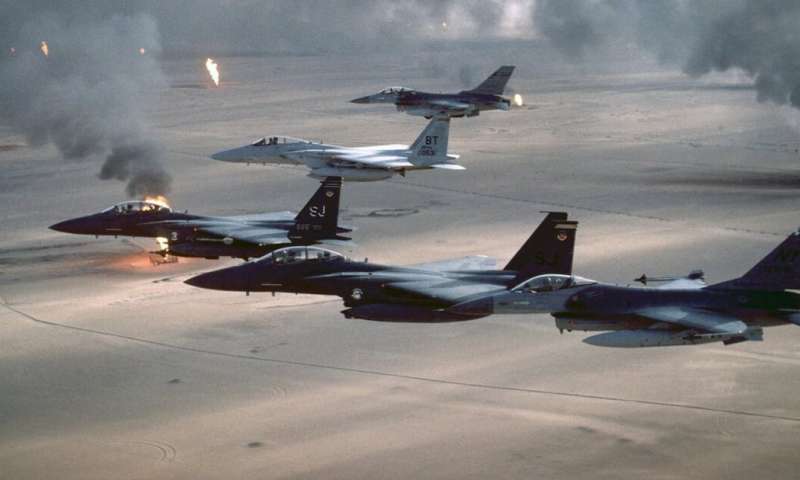 The US military's carbon bootprint is enormous. Like corporate supply chains, it relies upon an extensive global network of container ships, trucks and cargo planes to supply its operations with everything from bombs to humanitarian aid and hydrocarbon fuels. Our new study calculated the contribution of this vast infrastructure to climate change.

Greenhouse gas emission accounting usually focuses on how much energy and fuel civilians use. But recent work, including our own, shows that the US military is one of the largest polluters in history, consuming more liquid fuels and emitting more climate-changing gases than most medium-sized countries. If the US military were a country, its fuel usage alone would make it the 47th largest emitter of greenhouse gases in the world, sitting between Peru and Portugal.

It's no coincidence that US military emissions tend to be overlooked in climate change studies. It's very difficult to get consistent data from the Pentagon and across US government departments. In fact, the United States insisted on an exemption for reporting military emissions in the 1997 Kyoto Protocol. This loophole was closed by the Paris Accord, but with the Trump administration due to withdraw from the accord in 2020, this gap will will return.

Our study is based on data retrieved from multiple Freedom of Information Act requests to the US Defense Logistics Agency, the massive bureaucratic agency tasked with managing the US military's supply chains, including its hydrocarbon fuel purchases and distribution.

The US military has long understood that it isn't immune from the potential consequences of climate change—recognising it as a "threat multiplier" that can exacerbate other risks. Many, though not all, military bases have been preparing for climate change impacts like sea level rise. Nor has the military ignored its own contribution to the problem. As we have previously shown, the military has invested in developing alternative energy sources like biofuels, but these comprise only a tiny fraction of spending on fuels.

The American military's climate policy remains contradictory. There have been attempts to "green" aspects of its operations by increasing renewable electricity generation on bases, but it remains the single largest institutional consumer of hydrocarbons in the world. It has also locked itself into hydrocarbon-based weapons systems for years to come, by depending on existing aircraft and warships for open-ended operations.

Not green, but less, military

Climate change has become a hot-button topic on the campaign trail for the 2020 presidential election. Leading Democratic candidates, such as Senator Elizabeth Warren, and members of Congress like Alexandria Ocasio-Cortez are calling for major climate initiatives like the Green New Deal. For any of that to be effective, the US military's carbon bootprint must be addressed in domestic policy and international climate treaties.

Our study shows that action on climate change demands shuttering vast sections of the military machine. There are few activities on Earth as environmentally catastrophic as waging war. Significant reductions to the Pentagon's budget and shrinking its capacity to wage war would cause a huge drop in demand from the biggest consumer of liquid fuels in the world.

It does no good tinkering around the edges of the war machine's environmental impact. The money spent procuring and distributing fuel across the US empire could instead be spent as a peace dividend, helping to fund a Green New Deal in whatever form it might take. There are no shortage of policy priorities that could use a funding bump. Any of these options would be better than fuelling one of the largest military forces in history.

Provided by The Conversation