More than 40% of insect species are declining and a third are endangered, the analysis found. The rate of extinction is eight times faster than that of mammals, birds and reptiles. The total mass of insects is falling by a precipitous 2.5% a year, according to the best data available, suggesting they could vanish within a century.

The planet is at the start of a sixth mass extinction in its history, with huge losses already reported in larger animals that are easier to study. But insects are by far the most varied and abundant animals, outweighing humanity by 17 times. They are “essential” for the proper functioning of all ecosystems, the researchers say, as food for other creatures, pollinators and recyclers of nutrients.

Insect population collapses have recently been reported in Germany and Puerto Rico, but the review strongly indicates the crisis is global. The researchers set out their conclusions in unusually forceful terms for a peer-reviewed scientific paper: “The [insect] trends confirm that the sixth major extinction event is profoundly impacting [on] life forms on our planet.

“Unless we change our ways of producing food, insects as a whole will go down the path of extinction in a few decades,” they write. “The repercussions this will have for the planet’s ecosystems are catastrophic to say the least.”

The analysis, published in the journal Biological Conservation, says intensive agriculture is the main driver of the declines, particularly the heavy use of pesticides. Urbanisation and climate change are also significant factors.

“If insect species losses cannot be halted, this will have catastrophic consequences for both the planet’s ecosystems and for the survival of mankind,” said Francisco Sánchez-Bayo, at the University of Sydney, Australia, who wrote the review with Kris Wyckhuys at the China Academy of Agricultural Sciences in Beijing.

One of the biggest impacts of insect loss is on the many birds, reptiles, amphibians and fish that eat insects. “If this food source is taken away, all these animals starve to death,” he said. Such cascading effects have already been seen in Puerto Rico, where a recent study revealed a 98% fall in ground insects over 35 years.

The new analysis selected the 73 best studies done to date to assess the insect decline. Butterflies and moths are among the worst hit. For example, the number of widespread butterfly species fell by 58% on farmed land in England between 2000 and 2009. The UK has suffered the biggest recorded insect falls overall, though that is probably a result of being more intensely studied than most places.

Bees have also been seriously affected, with only half of the bumblebee species found in Oklahoma in the US in 1949 being present in 2013. The number of honeybee colonies in the US was 6 million in 1947, but 3.5 million have been lost since.

There are more than 350,000 species of beetle and many are thought to have declined, especially dung beetles. But there are also big gaps in knowledge, with very little known about many flies, ants, aphids, shield bugs and crickets. Experts say there is no reason to think they are faring any better than the studied species.

A small number of adaptable species are increasing in number, but not nearly enough to outweigh the big losses. “There are always some species that take advantage of vacuum left by the extinction of other species,” said Sanchez-Bayo. In the US, the common eastern bumblebee is increasing due to its tolerance of pesticides.

Most of the studies analysed were done in western Europe and the US, with a few ranging from Australia to China and Brazil to South Africa, but very few exist elsewhere.

“The main cause of the decline is agricultural intensification,” Sánchez-Bayo said. “That means the elimination of all trees and shrubs that normally surround the fields, so there are plain, bare fields that are treated with synthetic fertilisers and pesticides.” He said the demise of insects appears to have started at the dawn of the 20th century, accelerated during the 1950s and 1960s and reached “alarming proportions” over the last two decades.

He thinks new classes of insecticides introduced in the last 20 years, including neonicotinoids and fipronil, have been particularly damaging as they are used routinely and persist in the environment: “They sterilise the soil, killing all the grubs.” This has effects even in nature reserves nearby; the 75% insect losses recorded in Germany were in protected areas.

The world must change the way it produces food, Sánchez-Bayo said, noting that organic farms had more insects and that occasional pesticide use in the past did not cause the level of decline seen in recent decades. “Industrial-scale, intensive agriculture is the one that is killing the ecosystems,” he said.

In the tropics, where industrial agriculture is often not yet present, the rising temperatures due to climate change are thought to be a significant factor in the decline. The species there have adapted to very stable conditions and have little ability to change, as seen in Puerto Rico.

Sánchez-Bayo said the unusually strong language used in the review was not alarmist. “We wanted to really wake people up” and the reviewers and editor agreed, he said. “When you consider 80% of biomass of insects has disappeared in 25-30 years, it is a big concern.”

Other scientists agree that it is becoming clear that insect losses are now a serious global problem. “The evidence all points in the same direction,” said Prof Dave Goulson at the University of Sussex in the UK. “It should be of huge concern to all of us, for insects are at the heart of every food web, they pollinate the large majority of plant species, keep the soil healthy, recycle nutrients, control pests, and much more. Love them or loathe them, we humans cannot survive without insects.”

Matt Shardlow, at the conservation charity Buglife, said: “It is gravely sobering to see this collation of evidence that demonstrates the pitiful state of the world’s insect populations. It is increasingly obvious that the planet’s ecology is breaking and there is a need for an intense and global effort to halt and reverse these dreadful trends.” In his opinion, the review slightly overemphasises the role of pesticides and underplays global warming, though other unstudied factors such as light pollution might prove to be significant.

Prof Paul Ehrlich, at Stanford Universityin the US, has seen insects vanish first-hand, through his work on checkerspot butterflies on Stanford’s Jasper Ridge reserve. He first studied them in 1960 but they had all gone by 2000, largely due to climate change.

Ehrlich praised the review, saying: “It is extraordinary to have gone through all those studies and analysed them as well as they have.” He said the particularly large declines in aquatic insects were striking. “But they don’t mention that it is human overpopulation and overconsumption that is driving all the things [eradicating insects], including climate change,” he said.

Sánchez-Bayo said he had recently witnessed an insect crash himself. A recent family holiday involved a 400-mile (700km) drive across rural Australia, but he had not once had to clean the windscreen, he said. “Years ago you had to do this constantly.”

The Worldwide Threat to the Biodiversity of Insects

What is biodiversity and why does it matter to us? 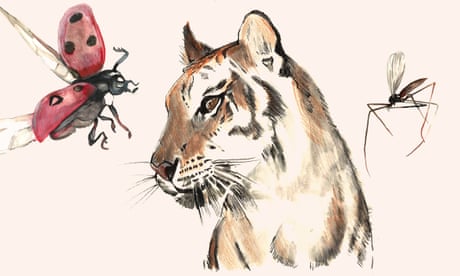 The study also indicates that insects, including bees, are vanishing due to damage to nature. Photograph: Rodrigo Garrido/Reuters

The “unnoticed insect apocalypse” should set alarm bells ringing, according to conservationists, who said that without a halt there will be profound consequences for humans and all life on Earth.

A new report suggested half of all insects may have been lost since 1970 as a result of the destruction of nature and heavy use of pesticides. The report said 40% of the 1million known species of insect are facing extinction.

The analysis, written by one of the UK’s leading ecologists, has a particular focus on the UK, whose insects are the most studied in the world. It said 23 bee and wasp species have become extinct in the last century, while the number of pesticide applications has approximately doubled in the last 25 years.

UK butterflies that specialise in particular habitats have fallen 77% since the mid-1970s and generalists have declined 46%, the report said. There are also knock-on effects on other animals, such as the spotted flycatcher which only eats flying insects. Its populations have dropped by 93% since 1967.

But conservationists said that insect populations can be rescued, by introducing firm targets to cut pesticide use and making urban parks and gardens more wildlife friendly. Scientists said insects are essential for all ecosystems, as pollinators, food for other creatures, and recyclers of nutrients.

“We can’t be sure, but in terms of numbers, we may have lost 50% or more of our insects since 1970 – it could be much more,” said Prof Dave Goulson, at the University of Sussex, UK, who wrote the report for the Wildlife Trusts. “We just don’t know, which is scary. If we don’t stop the decline of our insects there will be profound consequences for all life on earth [and] for human wellbeing.”

Studies of insect populations over decades are scarce, he said: “But the overwhelming weight of evidence that exists suggests the rapid decline is a real phenomenon. It really worries me to hear people say we need more long-term studies to be sure. That would be great, but we can’t wait another 25 years before we do anything because it will be too late.”

Gary Mantle, chief executive of Wiltshire Wildlife Trust, said: “This unnoticed apocalypse should set alarms ringing. We have put at risk some of the fundamental building blocks of life. But insects and other invertebrates can recover quickly if we stop killing them and restore the habitats they require to thrive. We all need to take action now in our gardens, parks, farms, and places of work.”

The planet is at the start of a sixth mass extinction in its history, with huge losses already reported in larger animals that are easier to study. But insects are by far the most varied and abundant animals, outweighing humanity by 17 times.

Insect population collapses have been reported in Germany and Puerto Rico, and the first global scientific review, published in February, said widespread declines threaten a “catastrophic collapse of nature’s ecosystems”.

Insects can be helped to recover by “rewilding” urban gardens and parks, Goulson said. “There is potential for a huge network of insect-friendly habitats right across the country. Already a lot of people are buying into the idea that they can make their gardens more wildlife friendly by letting go of control a bit. There are also quite a lot of councils going pesticide free.”

But he said: “The bigger challenge is farming – 70% of Britain is farmland. No matter how many gardens we make wildlife friendly, if 70% of the countryside remains largely hostile to life, then we are not going to turn around insect decline.”

The report called for the introduction of binding targets for pesticide reduction in farming and for support for farmers to reach them. This could be funded by a tax on the chemicals – Sweden has had such a levy since 1984, and France, Italy and Denmark now also have charges.

Virtually all farms could significantly cut their pesticide use while still producing as much food, according to a 2017 study. The research also showed that chemical treatments could be cut without affecting farm profits on three-quarters of farms.

Matt Shardlow, chief executive of the charity Buglife, said: “The very latest research shows that quality habitats [in the UK] are so isolated that most invertebrate species are failing to move north to keep track with the climate envelope in which they can survive. Restoring networks of habitats for insects is now a number one priority.”

Goulson said the UK’s departure from the European Union means large-scale change is possible: “Whatever people think of Brexit, there is this potential opportunity to completely revise our farming system.” He said giving funds for boosting nature and other public goods, rather than simply owning land, was a really exciting possibility.