1. Who are the Bushmen?
The 'Bushmen' are the oldest inhabitants of southern Africa, where they have lived for at least 20,000 years. Their home is in the vast expanse of the Kalahari Desert. The Bushmen are the remnants of Africa's oldest cultural group, genetically the closest surviving people to the original Homo sapiens “core” from which the Negroid people of Africa emerged. Bushmen are small in stature generally with light yellowish skin, which wrinkles very early in life.
Bushmen traditionally lived in Southern Africa in the following countries, although virtually none live purely by hunting and gathering today: Botswana, Namibia, South Africa, Zambia, Zimbabwe and Angola, with loosely related groups in Tanzania. Recorded history also placed them in Lesotho and Mozambique. Rock art and archaeological evidence can place them as far north as Libya, Egypt, Sudan and Ethiopia, with the evidence of legend & racial type suggesting some traces remain.
2. Bushmen people and language

There are many different Bushman peoples - they have no collective name for themselves, and the terms 'Bushman', 'San', 'Basarwa' (in Botswana) and so on are used variously. Most of those, which are widely understood, are imposed by outsiders and have some pejorative sense; many now use and accept the term 'Bushmen'. Khoi, on the opposite, are probably of similar heritage, but have become pastoralists before Bantu-speaking people from West Africa and white farmers immigrated into Southern Africa. “Khoisan” is used as a rather academic term referring to all Bushmen and the Khoe-Khoe of Southern Africa.
Bushmen speak a variety of languages, all of which incorporate 'click' sounds represented in writing by symbols such as ! Or /. The unique clicks used in Khoisan languages are varied and complex, with many varieties and applications throughout the different Clans and groups. Here is a very simplified description of the more common ones used. They are denoted by internationally recognised symbols.
<>•
<>•// (2 Forward slashes) - denotes a lateral dental click similar to the sound used to urge a horse.
<>•! (Equals sign bisected by a forward slash, “not-equal sign”) - denotes a sharp alveolar click made with the  tongue against the roof of the mouth.
<>•! (Exclamation mark) - denotes a sharp palato-alveolar click made with the tongue on the back of the gum  ridge. Cork popping sound.
3. How do they live?
Bushmen were hunter/gatherers, with traditionally about 70/80% of their diet consisting of plant food, including berries, nuts, roots and melons gathered primarily by the women. The remaining 20/30% was meat (mostly antelopes), hunted by the men using poisoned arrows and spears on hunts that could last several days. They made their own temporary homes from wood that they gathered.
Their hunting & gathering economy and social structure had remained virtually unchanged for tens of thousands of years until very recently, a socio-economic culture that has sustained mankind universally during their evolution until the advent of agriculture. The Bushmen did not farm or keep livestock, having no concept of the ownership of land or animal.

4. What is their social structure?
Their social structure is not tribal because they have no paramount leader and their ties of kinship are fairly relaxed. They are a loosely knit family culture where decisions are made by universal discussion and agreement by consensus. An individual's opinion is naturally weighted according to their level of skill and experience in the particular field of discussion.
Families within a clan would speak a common language but neighboring clans would usually speak a different tongue, although there would normally be a fair degree of similarity & understanding between them. Apart from family relations, bearing the same name (out of only about 35 names per gender) would also foster a “name kinship”.
Bushmen are generally nomadic within fairly limited boundaries, governed by the proximity of other families and clans. As a very loose guideline, the territory of a family may stretch to a 25-mile circle. Obviously, if there are no other bordering clans or other people these areas may stretch further, as far as is needed to ensure adequate food and water sources.
The roles of men & women were very distinct and rarely overlapped, which is a characteristic almost universal amongst hunter/gatherers the world over. It based on survival needs encouraging the most efficient utilisation of available skills and resources. Despite what is often perceived as a very sexist society, the importance of women is very high within the group and their opinions often take precedence, particularly where food is concerned.
5. Food and health
Traditionally, bushman women spent 3-4 days a week gathering veldkost (wild plants), often going out in groups to search for edible or medicinal plants. Furthermore, before the advent of trade with Bantu or white settlers, all tools, construction material, weapons or clothes were made of plants or animal products.
About 400-500 local plants and their uses were known to bushmen, along with the places where they grew – not only providing a balanced nutrition, but also moisture from roots even in time of drought. Plants were used in ways similar to western phytomedicine to treat wounds and heal illnesses; other plants where rather part of healing ceremonies in which a healer would burn plants to make rain, trance to heal an ailment, or perform a charm to bring fertility. The range of ailments treated included wounds including snakebites, colds, stomachache, toothache or headache, or diarrhea but also infections like malaria, tuberculosis, or syphilis. One bushman plant, Hoodia gordonii, even made the worldwide news since it was patented by a pharma company as a diet support due to its traditional bushman usage to suppress appetite and hunger a law case against “bio piracy” ensued, with the parties settling to royalties being paid to bushmen organisations.
The Bushmen’s diet and relaxed lifestyle have prevented most of the stress-related diseases of the western world. Bushmen health, in general, is not good though: 50% of children die before the age of 15; 20% die within their first year (mostly of gastrointestinal infections). Average life expectancy is about 45-50 years; respiratory infections and malaria are the major reasons for death in adults. Only 10% become older than 60 years. 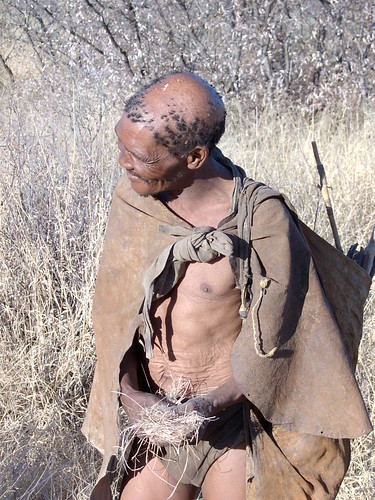 6. Birth, Death, Marriage and initiation
Amongst the Bushman or San, birth is not generally a big issue. They don't really prepare and or go to a hospital like modern man. It is claimed that a Bushman women who is about to give birth will simply go behind a bush and "squeeze out" the baby. There is also some claims that they prepare a medicine from devils claw (Harpagophytum spp.), have the baby, and is back in her daily routine within a hour. In reality she is likely to take her mom or an elder aunt along, for comfort and help. The book "Shadow Bird" by Willemien le Roux, describes a Bushman birth with complications, and the old woman that was called to help, so it doesn't always go as easy as it is supposed to.
After the birth a Bushman child will receive much love and attention from his parents and other adults and even older children. Their love of children, both their own and that of other people, is one of the most noticeable things about the Bushman.
If a child is born under very severe drought conditions, when the fertility of the Bushman women are in any case low, perhaps to precvent such an occurrence. The mother will quietly relieve the just born baby of severe and certain future suffering by ending its life. This is most likely to happen in lean years, if she is still suckling another child and will obviously not be able to feed both of the children. This is accepted behaviour, and born out of necessity and not malice or any other consideration. It stems from the simple realiy of live in a harsh climate, and the realisation that the life of the child that a lot has already been invested in, and that might be put at risk by tender feelings for a new-born that are in any case likely to die soon, are not likely to have a good outcome.
Death is a very natural thing to the Bushmen as shown by the following lines from a Bushman song, quoted by Coral Fourie in her book "Living Legends of a dying culture".
"The day we die a soft breeze will wipe out our footprints in the sand. When the wind dies down, who will tell the timelessness that once we walked this way in the dawn of time?"
If some-ones dies at a specific camp, the clan will move away and never camp at that spot again. Bushmen will never knowingly cross the place where some-one has been buried. If they have to pass near such a place, they will throw a pebble on the grave and mutter under their breath, to the spirits to ensure good luck. They never step on a grave and believe that the spirit remains active on that spot above ground, and they don't want to offend it.
Amoing most Bushmen, a wedding is a private event between the Bridegroom and the Bride. Only in exceptional cases may a guest be invited, but there is no celebration or other ritual, as we understand it, only a private "ceremony" or agreement between the two people involved.
The Bushmen don't have initiaion ceremonies. There is some dancing and cleansing ceremony after a maiden has shed her first menstrual blood. Boys are not considered men untill they have killed their first large and dangerous animal. Thereafter they are are treated as full members of the clan or group. 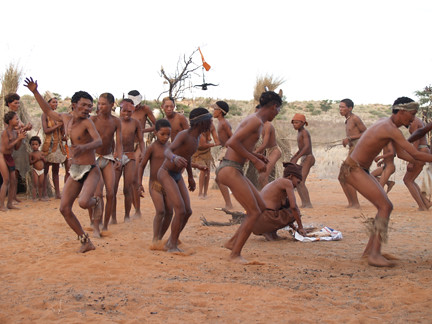