A top Russian scientist who was working on a Covid-19 vaccine has been found dead in suspicious circumstances in St Petersburg, adding one more to the list of people engaged in coronavirus research dropping dead mysteriously.

Alexander ‘Sasha’ Kagansky, 45, was reported to have fallen in his underwear from a 14th floor window of a high rise flat – and was found with stab wounds.

The Russian biologist had close links to Edinburgh University and had been working in the city for 13 years until at least 2017.

The Russian Investigative Committee has opened a murder probe and a 45-year-old male suspect has been detained, according to Moskovsky Komsomolets (MK).

Dr Kagansky had served as Director of the Centre for Genomic and Regenerative Medicine at Russia’s Far Eastern Federal University in Vladivostok, where he continued research collaboration with the Scottish university.

He had recently received a Russian grant to study new ways of diagnosing and treating malignant brain tumours.

He was an advocate of research into the uses of herbs and mushrooms as potentially offering solutions in treating cancers.

Earlier he had studied and worked in the US.

In 1991 as the USSR collapsed he was the first Russian delegate to the European Youth Parliament. He was also a member of Young Academy of Scotland.

MK reported that the academic had been “developing a vaccine against coronavirus” and that he died “under strange circumstances”.

The body of geneticist and molecular and cellular biologist Alexander Kagansky, 45, was found in the courtyard of a 16-story apartment block Saturday. The Fontanka.ru news website reported that he had been visiting an old schoolmate on their birthday the day of his death.

The report goes on to claim cops believed a “scuffle” had taken place before Kagansky fell.

His body was found lifeless by a neighbor, a resident woman, under a block on Zamshin Street in Russia's second city in early afternoon.

He had recently received a Russian grant to study new ways of diagnosing and treating malignant brain tumours, and was an advocate of research into the uses of herbs and mushrooms as a cancer treatment.

Russia’s Investigative Committee, which only identified Kagansky by his birth year of 1975, said it detained an unnamed 45-year-old suspect as part of a murder investigation.

The suspect denied that he had stabbed Kagansky and claimed that the scientist had wounded himself, Fontanka.ru reported, citing unnamed sources.

Fontanka.ru added that the 45-year-old suspect, who was due to be released Monday after 48 hours spent under arrest, is expected to take a lie detector test. The Nevskiye Novosti news website identified Kagansky’s old classmate as former Nezavisimaya Gazeta newspaper employee Igor Ivanov.

The suspect, who is reportedly a friend of Dr Kaganksy, has claimed that the biologist was in a mentally unstable state before his death and injured himself with a knife. He claimed that Dr Kaganksy jumped from the balcony when he tried to take the weapon from him.

The outlet also reported that Kagansky, whose affiliations included the Maryland-based National Cancer Institute and the University of Edinburgh, was recently working on a Covid-19 vaccine in Scotland.

The Vladivostok-based Far Eastern Federal University, where Kagansky led the Genomic and Regenerative Medicine Center at its School of Biomedicine, said it mourns the death of an influential scientist whose works were regularly published in leading global scientific journals. 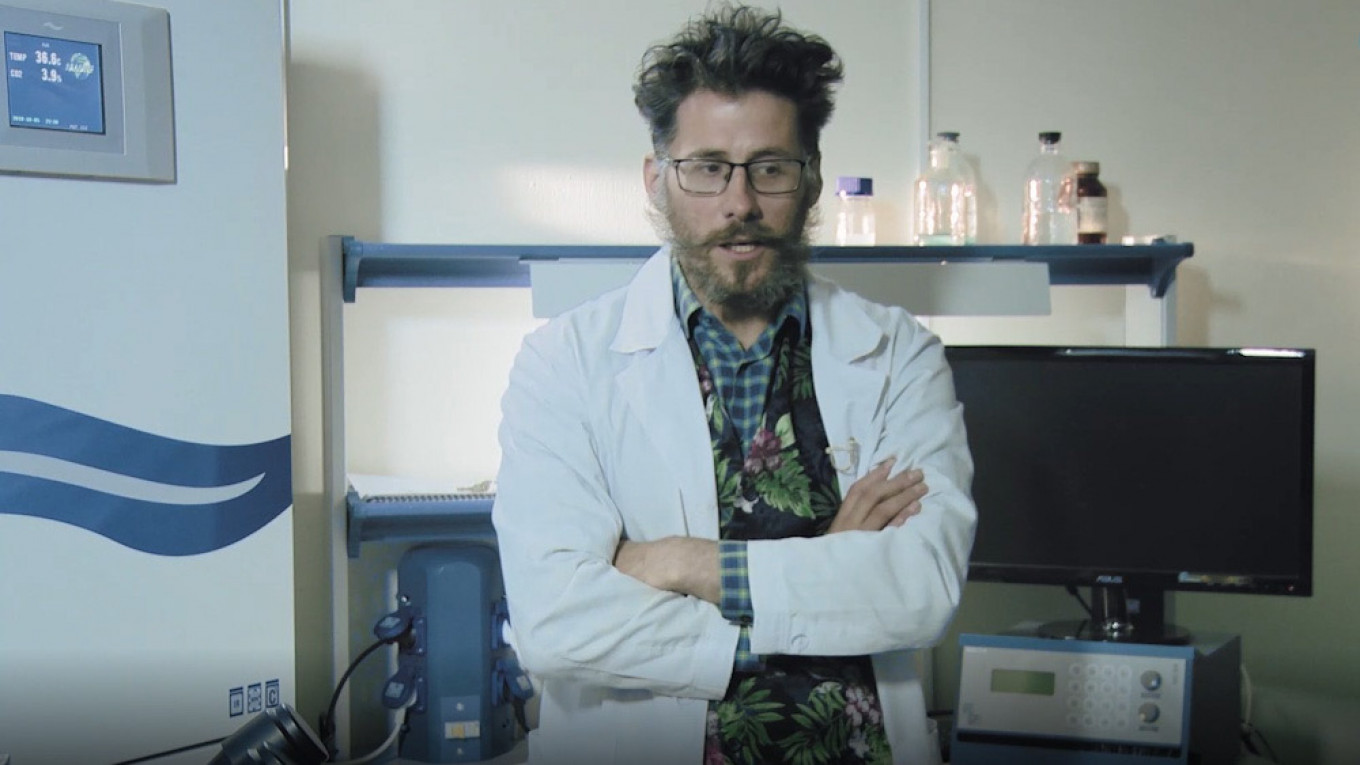 Geneticist and molecular and cellular biologist Alexander Kagansky had reportedly been working on a Covid-19 vaccine in Scotland recently. Screenshot Youtube

The death of the Russian scientist adds to the list of people engaged in coronavirus research dropping dead in mysterious circumstances.

In early February, renowned scientist Frank Plummer who received Saudi SARS Coronavirus sample and was working on Coronavirus (HIV) vaccine in the Winnipeg based Canadian lab was assassinated in Kenya soon after it was revealed in GreatGameIndia investigation that Frank Plummer was the key to the Chinese Biological Espionage case at Winnipeg’s National Microbiology Laboratory. It was from this Canadian lab that coronavirus was smuggled by Chinese Biowarfare agents and weaponized in Wuhan.

In May, Professor Bing Liu of the University of Pittsburgh who was on the verge of a breakthrough in scientific understanding of the new coronavirus was shot dead. He was found in his townhouse with gunshot wounds to the head, neck, torso and extremities.

“Bing was on the verge of making very significant findings toward understanding the cellular mechanisms that underlie SARS-CoV-2 infection and the cellular basis of the following complications,” his colleagues at the university’s Department of Computational and Systems Biology said in a statement.

Gita Ramjee, an HIV scientist died of Coronavirus when she was in London to deliver a lecture in March. On her return to South Africa she felt unwell and was hospitalised. Her specialisation in HIV prevention and treatment research led her to lead the expansion of phase I through phase III HIV prevention and treatment clinical trials in the greater Durban area as the Clinical Trials Unit Principal Investigator.

A WHO driver carrying Coronavirus samples was shot dead in Myanmar, in May. The World Health Organization (WHO) vehicle carrying coronavirus test samples came under attack, leaving the driver dead and a government official seriously injured. Pyae Sone Win Maung was driving a well-marked United Nations vehicle when it was hit by gunfire in Rakhine State.

Vaccine whistleblower Brandy Vaughan, a former sales executive for the pharmaceutical company Merck and the founder of learntherisk.org, a website dedicated to educating people on the risks associated with vaccines, was found dead in her home beside her nine-year-old son on December 8. On Monday, the Santa Barbara County Sheriff’s Office announced an investigation into the circumstances surrounding her death.

Read on Brandy Vaughan also in The Vaccine Conundrum and

Person of Interest in Coronavirus Investigation

There are also those researchers of interest who could be investigated for their shady role in manufacturing the worldwide pandemic of fear. Below we highlight a couple of them who are key to Coronavirus investigation.

The President of EcoHealth Alliance, Peter Daszak is the one who orchestrated the myth that COVID-19 is natural in origin. Emails obtained by U.S. Right to Know show that a statement in The Lancet authored by 27 prominent public health scientists condemning “conspiracy theories suggesting that COVID-19 does not have a natural origin” was organized by employees of EcoHealth Alliance.

EcoHealth Alliance interestingly is the same non-profit group that received millions of dollars of U.S. taxpayer funding to genetically manipulate coronaviruses with scientists at the Wuhan Institute of Virology.

Dutch Virologist Ron Fouchier is a controversial figure in the field of Viroscience. He created world’s deadliest virus strain and his research sparked a global controversy to de-fund and shutdown such experiments. Experts have raised concerns legally that such experiments could not only lead to a global pandemic but could also lead to bio-terrorism.

However, Ron Fouchier is also a key to the COVID-19 investigation. He isolated the SARS Coronavirus smuggled out of Saudi Arabia which was sent to the Canadian scientist Frank Plummer, who ended up dead a week after GreatGameIndia‘s report was published.

GreatGameIndia is a journal on Geopolitics and International Relations. Get to know the Geopolitical threats India is facing in our exclusive book India in Cognitive Dissonance.